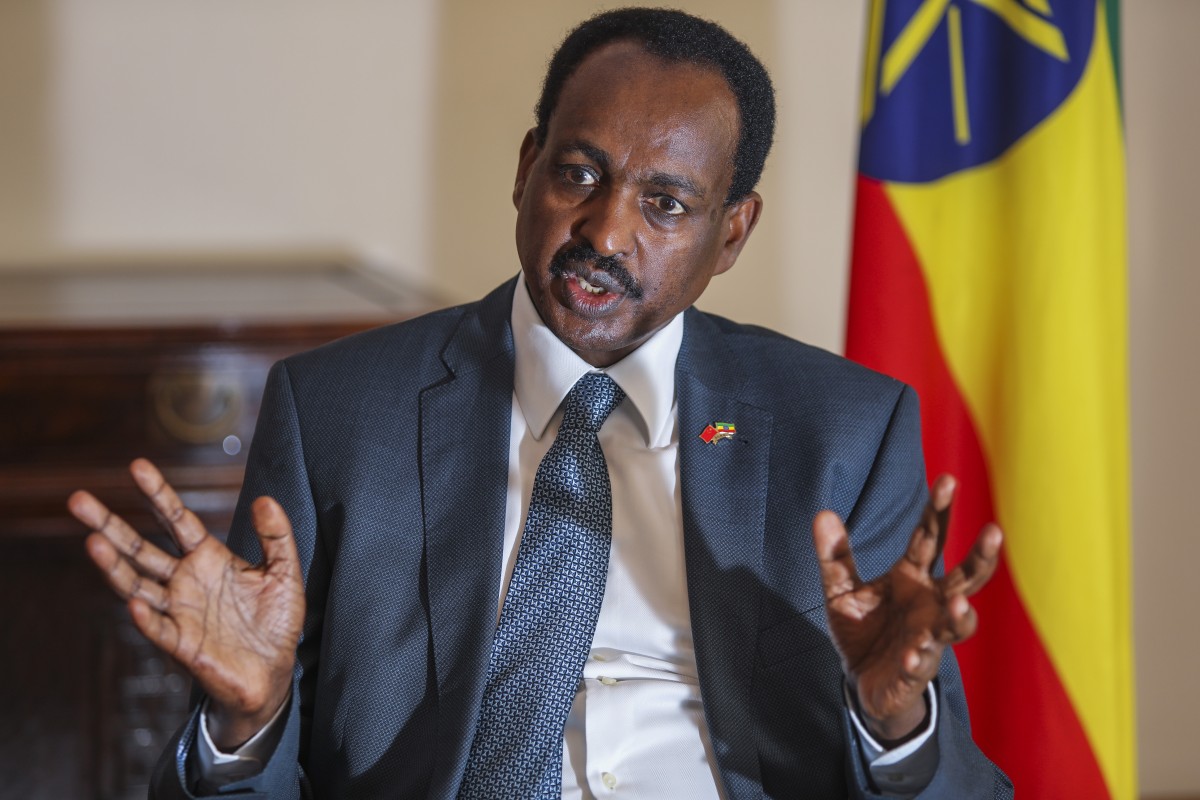 Ethiopian ambassador to China Teshome Toga Chanaka said the two sides were in talks to restructure loans that have “put serious stress on our repaying capability”. Photo: Simon Song

Ethiopia is renegotiating billions of dollars in loans from Beijing for a railway that links the Ethiopian capital to neighbouring Djibouti, to avoid being buried by “serious” debt woes tied to China’s controversial infrastructure push, Ethiopia’s top Beijing envoy said.

But despite the increasing debt pressure on Africa’s fastest growing economy, Ethiopian ambassador to China Teshome Toga Chanaka defended the ambitious trade and infrastructure plan known as the “Belt and Road Initiative” against criticism that it is a “debt trap” for developing countries.

“Those who may think this is an investment that is not worth investing on the Chinese side, I think that’s wrong because … if you are talking from an economic rationale, I think it makes a lot of sense,” Chanaka told the South China Morning Post in an interview last week at his residence in the Chinese capital.

“This is a very big country with huge potential for both passengers and cargo freight,” he said. “And eventually as our productivity increases and our export expands, definitely the cargo freight would be fully utilised,” Chanaka said. “There’s no question about that.”

Beijing is seeking to build roads, railways, ports and pipelines in more than 60 countries globally, mostly through state financing, under the belt and road, an effort to recreate the ancient Silk Road network of trade routes that connected the East and West.

As a top destination for Chinese loans in Africa, Ethiopia has received over US$12.1 billion from China’s state policy banks since 2000, according to a report last year by Johns Hopkins University, a private US research institution.

The Addis Ababa – Djibouti Railway is an important part of the belt and road scheme in Africa since it connects landlocked Ethiopia to the sea by linking the capital, Addis Ababa, with the Port of Doraleh, a multipurpose port just west of the Djiboutian capital Djibouti City, with terminals for handling oil, bulk cargo and containers.

Chanaka said the two governments were in talks to restructure the loans for the railway, which opened on January 1, 2018, and “especially the commercial loan, because it has put serious stress on our repaying capability”.

“We are negotiating with China as to how to manage the debt, to make it sustainable and try to reduce some distress that comes from debt … and there is substantial progress,” Chanaka said. The two sides were moving closer to making the deal final, the envoy said. 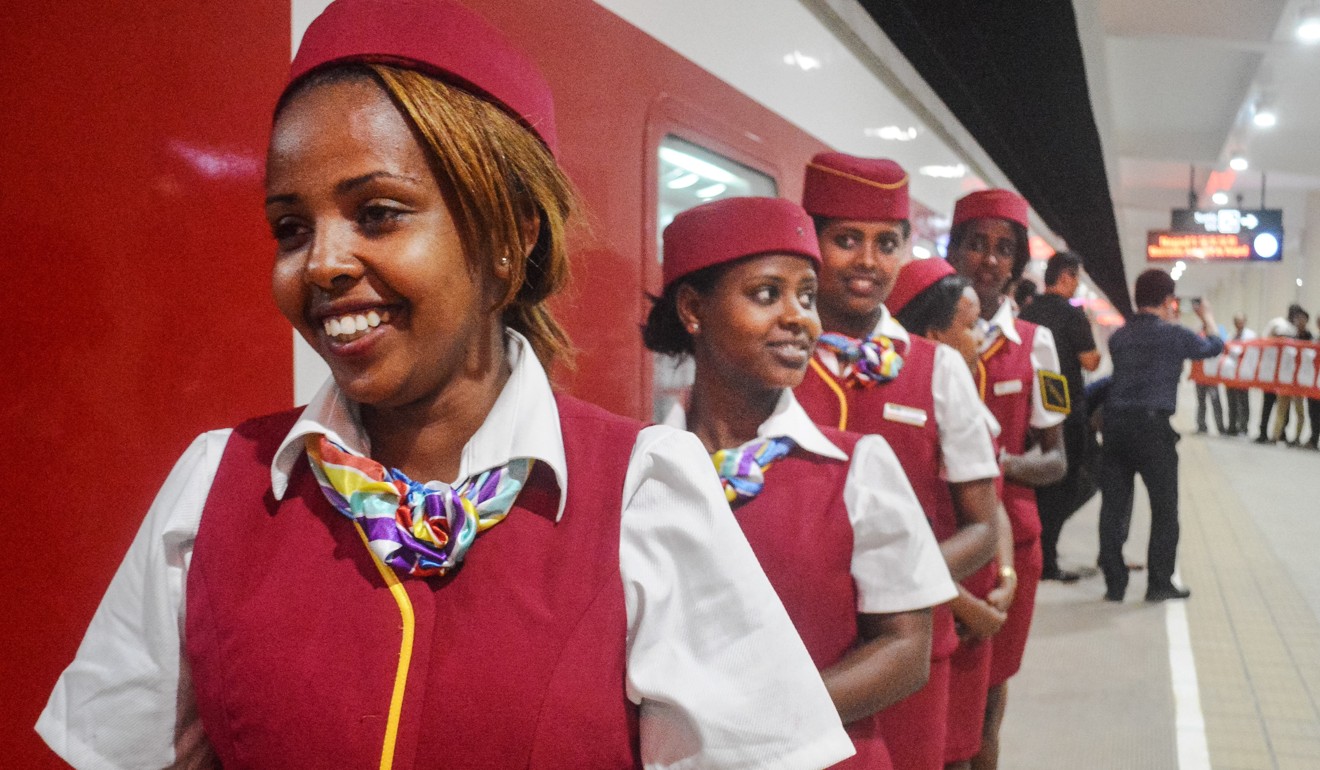 Railway staff make history with the arrival of the first commercial train from Addis Ababa at a platform at Nagad railway station in Djibouti in January 2018. Photo: AFP
Share:

When Ethiopian Prime Minister Abiy Ahmed visited Beijing in September, he said the Chinese government had agreed to restructure some of its loan agreements with Addis Ababa, and had extended the period for repaying the railway debt by 20 years.

The 756km (470-mile) rail link – the first standard-gauge electrified railway on the continent built with Chinese standards and technology – was fully financed by Chinese banks and built by two Chinese state-owned companies.

Is Italy willing to defy the US and EU to join the belt and road?

Export-Import Bank of China put up US$2.9 billion, or about 70 per cent, of its cost, according to China’s finance ministry.

Although the investment has left Ethiopia now looking to reduce its debt load, just over a year after the railway’s opening, Chanaka maintains it was a wise move to sign up for the project since it links Ethiopia, a country of 100 million people seeking to become a significant regional and international trade player, with Djibouti, the gateway to the Suez Canal and the Red Sea. 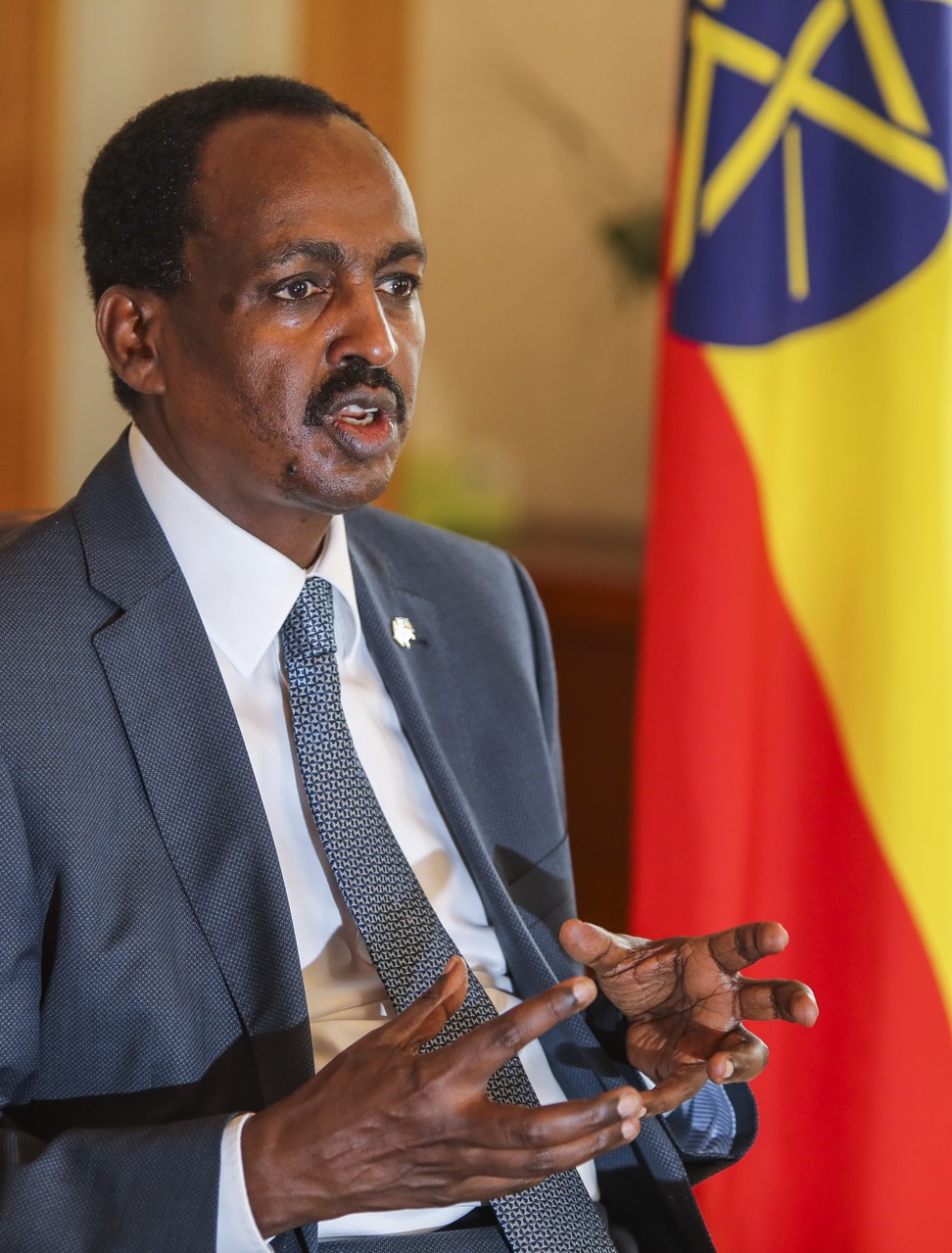 Although Ethiopia is caught in the middle of the China-US rivalry, Teshome Toga Chanaka said his country would not take sides. Photo: Simon Song
Share:

Showing Ethiopia’s commitment to the plan, Prime Minister Ahmed, an advocate of wide-scale domestic economic reform, is to be a guest at the second belt and road summit later this month in Beijing. Chinese President Xi Jinping is expected to host a multitude of world leaders at what is considered a major diplomatic event.

The prime minister’s vote of confidence in the initiative comes as sceptics continue to criticise China for opaque and aggressive lending practices that set a “debt trap” for countries that are financially vulnerable and hampered by an infrastructure deficit – a decline in government infrastructure spending combined with an increase in construction costs.

China has denied the accusations.

But several countries hosting belt and road projects, including Malaysia and the Maldives, are now seeking to renegotiate their investment deals with Beijing, describing them as poor value for money. 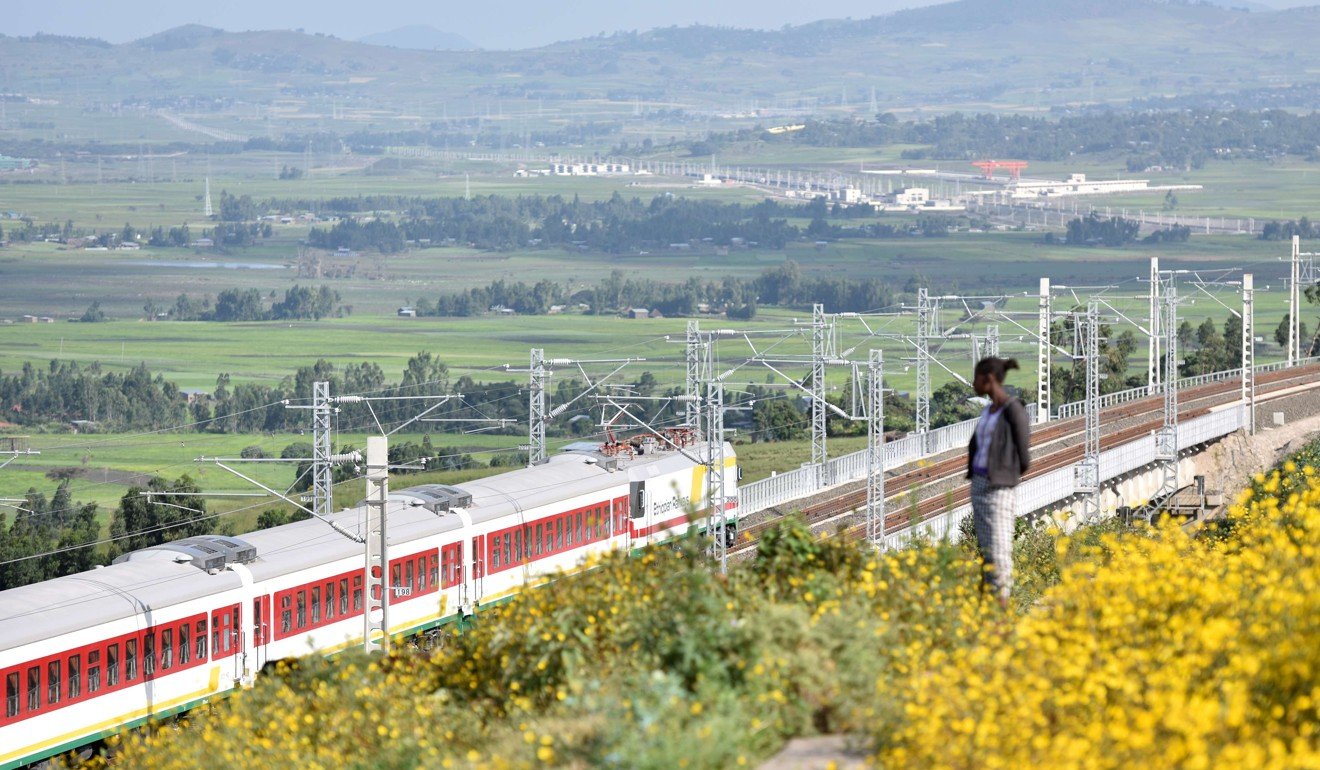 A train runs on the Ethiopia-Djibouti railway during an operational test near Addis Ababa in 2016. Photo: Xinhua
Share:

Namibia’s opposition party leader McHenry Venaani in February urged the government to renegotiate its loan agreement with China, calling the deal’s original terms badly structured. The pact did not necessarily benefit local people, despite creating opportunities in the southwestern African country, Venaani was quoted as saying by local newspaper The Namibian.

Chanaka said Ethiopia received different kinds of loans from China – a blend of interest-free, commercial and concessional borrowings. Concessional loans are those that are granted on terms substantially more generous than market loans.

Rather than focus on the growing debt pile, the envoy said, it was more relevant to look at how and in what sectors the borrowed money was spent, suggesting some of it would be used to improve productivity.

“I think making generalisations [about the] several countries taking part in the initiative would mislead us,” Chanaka said, pointing out that China was backing projects in the host countries with “trillions of [US] dollars”. 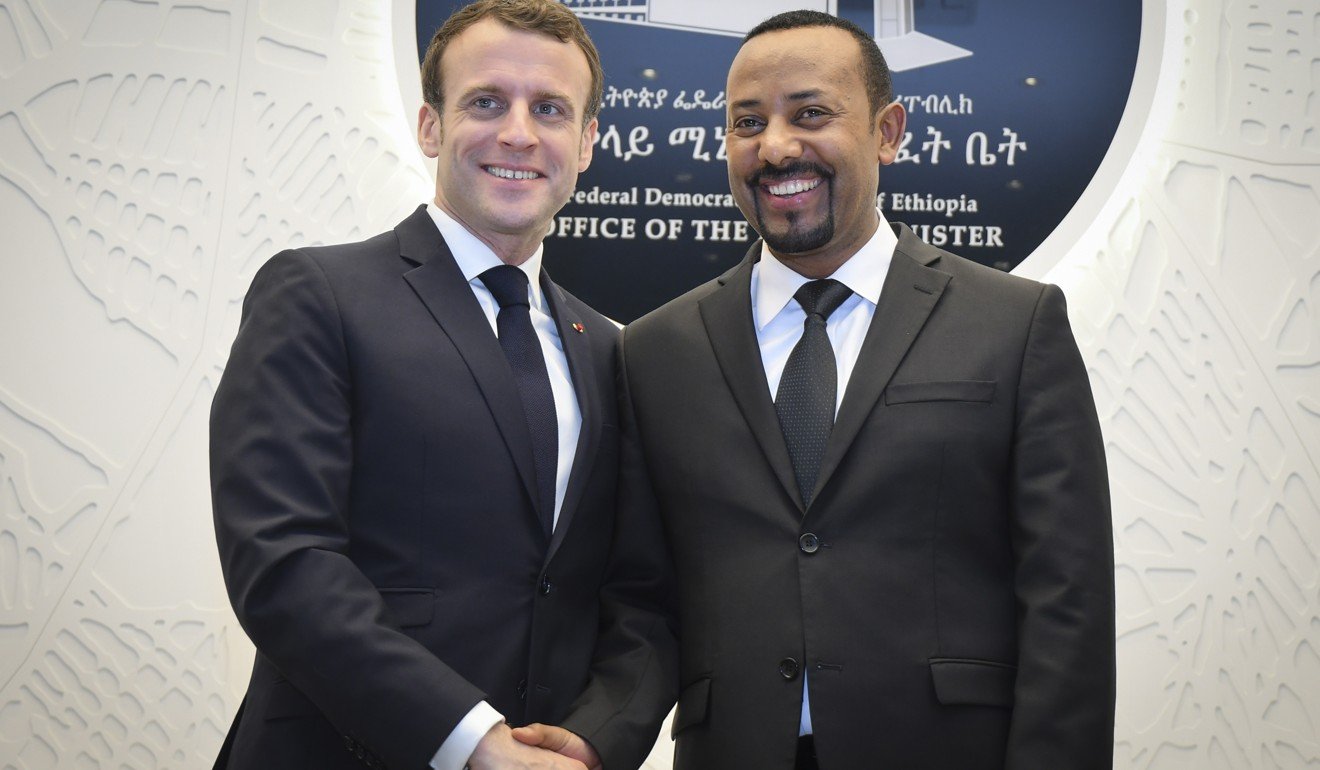 Critics worry that the Africa is trading too much influence over its affairs to China for investment. China already is the largest trading partner of Ethiopia and most countries in Africa.

Moreover, it has expanded its engagement in the resource-rich continent beyond infrastructure into humanitarian aid, security and technology.

In 2017, China opened its first overseas naval base in Djibouti, and Beijing has been funding the operation of a peacekeeping force from Ethiopia while actively mediating the civil war in South Sudan between the government and opposition forces.

Chinese scientists and banks are also supporting Ethiopia’s efforts to launch its first satellite, this September, one year after Xi promised leaders from 53 African countries in Beijing that China would support their continent with US$60 billion in financing. Export-Import Bank of China put up US$2.9 billion, or 70 per cent, of the cost of the Addis Ababa-Djibouti Railway. Photo: Felix Wong
Share:

In response to China’s growing influence over Africa, the administration of US President Donald Trump in December unveiled “Prosper Africa”, a strategy for boosting trade between the US and the African continent.

White House National Security Adviser John Bolton, in announcing the programme, accused Beijing of using bribes and opaque agreements and the strategic use of debt “to hold states in Africa captive to Beijing’s wishes and demands”.

Belt and road has more pros than cons

Bolton thus cast Africa as the next battleground in the China-US rivalry for global influence.

Although Ethiopia is caught in the middle of the China-US rivalry, Chanaka said his country would not take sides.

“We have enough space for all of them to invest in Africa and Ethiopia,” the envoy said.

This article appeared in the South China Morning Post print edition as: Ethi opia in talks to ease rai