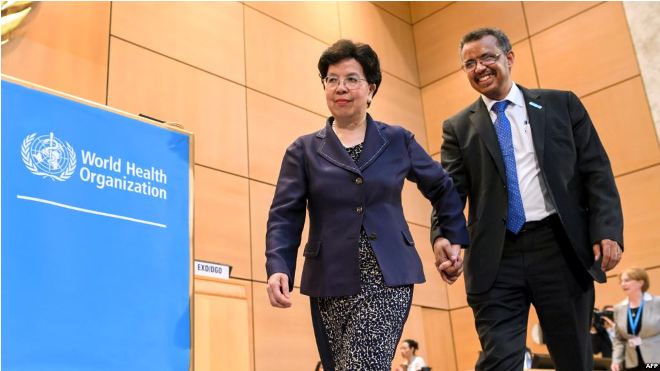 The vote by 185 member states took place by secret ballot after the candidates made last minute pitches.

The candidates have been campaigning for this fiercely contested post for the past year-and-a-half. As they approached the final stretch, each in turn presented his or her most persuasive arguments for becoming the new director-general of the World Health Organization.

Tedros, a former Ethiopian health minister, told the assembly that he has dedicated his whole life to improving health, reducing inequalities, and helping people everywhere to lead more productive lives.

He noted that while the WHO has never had a director-general from Africa, no one should elect him just because he’s from Africa.

“But, there is a real value in electing a leader who has worked in one of the toughest health environments and transformed the health system. I bring a fresh perspective, an angle with which the world has never seen before,” Tedros said.

Not to be outdone, the second candidate, David Nabarro of Britain, put in a vigorous performance. He touted his long experience in global health and described the work he has done in tackling infectious outbreaks and emergencies, such as the Ebola epidemic in West Africa.

He said he was the best person to lead the fight against newly emerging diseases and ongoing old diseases, including tuberculosis, malaria and AIDS.

“Governments and other investors rightly expect value for money in everything that WHO does. As director-general, I will make sure that the organization’s goals are results-focused, transparent and measurable. All staff, myself included, will be held to account for delivering,” said Nabarro.

The third candidate, Pakistani physician Sania Nishtar, said she had a proven record of dealing with hard issues and would make constructive changes to the WHO if elected.

“I promise to run WHO in the same manner in which I ran my campaign – cost-effectively, with full transparency, with a global outlook, with integrity, and respect for all .… I have the ability to accelerate the reforms that you have championed.”

Ethiopia’s Tedros takes over as new WHO director-general, on July 1.