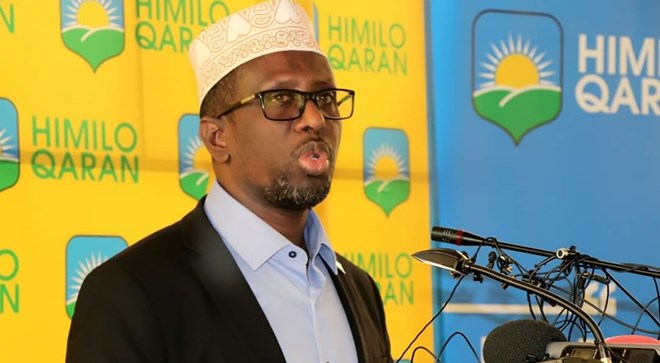 Addressing the media Monday in Mogadishu, Sharif said it was ‘unimaginable’ that the two leaders were now imposing iron fist rule in Somalia yet they had lived in democracies in the West.

“I am a Mullah and people expected me to hold on to power and dictate but I refused. It is unimaginable that people who have lived in America and Europe could be such authoritarian,” Sharif told journalists.

The former president who served in the last Transitional Federal Government from 2009 to 2012 described his former Prime Minister and current premier Khaire as ‘not having the interests of Somalia at heart’.“They do not have any investments in Somalia, they have foreign passports, they will go back tomorrow.” The former TFG leader said Farmaajo came to Mogadishu with ‘a suit and briefcase only’ and that he did not know ‘we were the ones who rebuilt this airport the first time’.

The Himilo Party chairman was reacting to Sunday’s developments at Aden Adde Airport where he was barred from boarding a flight to Kismayu to attend the inauguration of Jubbaland president Ahmed Madobe.

The Federal Government through eh Civil Aviation Authority Monday announced cancellation of all flights heading to Kismayu until the end of the Madobe’s inauguration ceremony September 26.

Farmaajo resigned after 7 months in office in 2011 following what became the Kampala Accord which saw the extension of the TFG until August 2012.